Holding Economic Outlook 2023, Hana Bank is prepared to meet the challenges of the global recession. November 01, 2022
Share To : 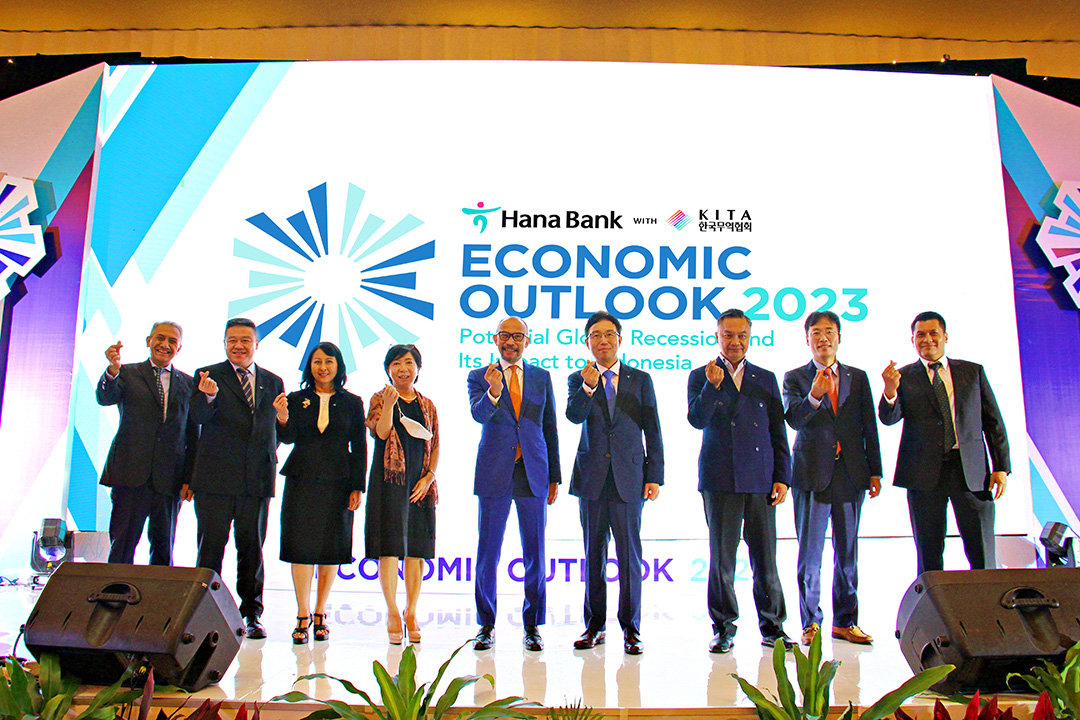 JAKARTA, October 27, 2022 – In order to provide its views on various national and global economic future challenges, PT Bank KEB Hana Indonesia (Hana Bank), one of the largest banks in South Korea, held the Hana Bank Economic Outlook 2023 in Jakarta on Wednesday, October 26, 2022, with the theme "Potential Global Recession and its Impact to Indonesia".

This event was carried out in collaboration between Hana Bank and the largest trade association in South Korea, The Korea International Trade Association (KITA), and was attended by the Head of the Fiscal Policy Agency of the Ministry of Finance, Febrio Nathan Kacaribu, to deliver a keynote speech, the President Director of Hana Bank, Park Jong Jin, and the board of directors and commissioners of Hana Bank.

Hana Bank Economic Outlook 2023 is Hana Bank's twelfth (12th) time held since 2010, divided into two sessions. The Indonesian session was presented by a senior economist from the University of Indonesia and the Minister of Finance for the 2013-2014 period, Muhamad Chatib Basri. The second session, the South Korean Session, opened with a presentation by Jung Yoo Tak and Kang Mi Jung from the Hana Financial Group Research Department with the theme "Global and Indonesian Economy/Financial Forecast," followed by a presentation by Hong Yoo Young from the Korea International Trade Association (KITA) on "Responsive and Utilization of the Indonesia-Korea Comprehensive Economic Partnership Agreement (IK-CEPA).

President Director of Hana Bank, Park Jong Jin, said that the Hana Bank Economic Outlook 2023 is becoming an important step for companies and stakeholders to see the various challenges of the global economy in the future as a good opportunity.

"Despite the easing of the Covid-19 pandemic policy this year, the global economy in 2023 will continue to have an impact due to ongoing geopolitical conflicts and tightening monetary policy which causes a slowdown in economic growth. Maybe we will face a crisis, but if we can understand and respond appropriately, we will be able to overcome it. Similarly, in overcoming the Covid-19 pandemic, Hana Bank will continue to be a trusted financial partner for all Indonesian public," said Park Jong Jin in his remarks at the Hana Bank Economic Outlook 2023, Jakarta.

On the same occasion, Head of the Fiscal Policy Agency of the Ministry of Finance, Febrio Nathan Kacaribu, said that the government invites the public to be optimistic in viewing the current global risks and uncertainties. Because over the past eight years, the government together with the community have fostered important capital to create conducive development. This is reflected in the 2023 APBN which focuses on the main agenda, namely superior, productive, and innovative human resources; acceleration of infrastructure development, especially in the fields of energy, food, connectivity, and ICT; effectiveness of bureaucratic reform; industrial revitalization with stronger downstreaming; and the development of green economic development.

According to Febrio, in the midst of global uncertainty, Indonesia is still experiencing quite good growth. The government projects economic growth in 2023 at 5.3%. Therefore, the future economic recovery must be stronger and of higher quality.

“The Covid-19 pandemic has had a major impact on the global economy. Shifting risk is no less a challenge. For this reason, we hope that Hana Bank Economic Outlook 2023 will become a conducive forum for viewing, analyzing, paying attention to opportunities that can be taken, mitigating challenges, and exploring opportunities – especially in the banking sector – so that they can play a strong role and contribute to accelerating economic recovery, not only in the short term but also in the long term, "said Febrio.

In his presentation, Muhamad Chatib Basri, gave an illustration that the global recession would certainly have the potential to have an impact on the Indonesian economy. He said “one of the main causes of the global recession is the recent increase in interest rates in the United States”. As a result, the United States economy slowed down and directly slowed the pace of the global economy. One of those affected is commodity and energy prices. Indonesia being a country that is dependent on these two sectors will certainly feel the impact.

"When the United States experiences a recession, of course this will affect the economies in other countries, including Indonesia, which will see its economy slow down," said Chatib.

He also explained the impact of the Indonesian economy on things happening globally, at least from two sides. In terms of trade routes, the global recession will cause Indonesia's exports to slow down. However, the export share of Indonesia's gross domestic product (GDP) is relatively small, at around 25%, when compared to other countries such as Singapore, South Korea, Malaysia, or other export-oriented countries. In addition, the geopolitical crisis that occurred, namely the Russo-Ukrainian War, still made coal prices relatively high. Thus, Indonesia is increasingly helped because the impact of trade routes on the country's economy is relatively limited.

Meanwhile, in the financial sector, Chatib saw on the Rupiah pressure of United States Dollar strengthening due to the relatively better economic growth of the United States compared to Europe and the increase in interest rates carried out by the Fed's central bank. Because of this pressure on the Indonesian currency, there will be an impact on the Indonesian economy through balance sheet effects such as firms, profit repatriation, and rising interest rates.

Hong Yoo Young, from the Korea International Trade Association (KITA), speaker at the Hana Bank Economic Outlook 2023, emphasized that his party remained committed to the important bilateral agreement that had been made, namely the Indonesia-Korea Comprehensive Economic Partnership Agreement (Indonesia-Korea Comprehensive). The Economic Partnership Agreement (IK-CEPA), which was agreed to be resumed in February 2019.